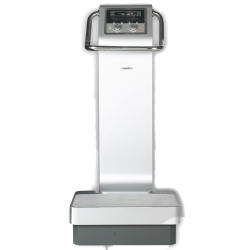 As we age, the biggest challenge to quality of life and mobility is the loss of muscle mass.

Although diet, inflammation and adequate protein intake is important, exercise is the strongest tool against the age related loss of muscle mass (a term referred to as sacropenia).

The end outcome is the same.  Less activity breeds less activity and you end up spending the last portion of your years in a recliner watching TV as your health goes down the tubes.

But it absolutely does not have to be this way.  It is a choice.

For those who have gone too far down the rabbit hole and have lost so much muscle mass that exercise seems impossible, there may be an answer.

Whole body vibration is a therapy that uses a plate that you stand on and then vibrates at varying frequencies.  Initially, the research on vibration was focused on the dark side; occupational exposure from jobs like truck driving and jackhammering.  Too much vibration is generally not a good thing.

There have been some very clear and consistent messages coming out of the medical research—vibration plate exercises are very good for building muscle mass.  This approach could open up a brand new world of healthy aging for those who are stuck in the hole of inactivity.

Our office has had a whole body vibration unit for almost a decade now and the results have been interesting, to say the least.  Parkinson’s patients.  Post stroke patients.  Patients who have lost weight and increased dexterity.  Increased sense of well-being.  All from any incredibly simple treatment that requires pretty much no effort on the part of the patient.

Just in case you think this sounds too good to be true, this particular article looks into what happens when vibration plate exercises are used to fight aging.  Keep in mind that this is a small mouse study, but there is nothing here that would preclude the results from being similar in humans.

As a reminder, this is a mouse study.  That being said, the benefits from something that requires no actual effort on the part of the patient were pretty impressive.  Impressive enough to begin your search for a decent vibration plate if you are at a point in your life where exercise has become difficult or even impossible.

You can spend outrageous amounts of money on a high quality vibration unit (like we did about a decade ago), but for most of us that’s not a viable option.  Our office sells a very high quality unit from Ridge and Company that sells for $1500 (contact us if you have an interest).  Amazon, who sells pretty much everything, has a large number of units available as well.  But keep in mind that any unit that is priced under $500 or so it going to be a lower quality unit that you may not see the same benefits from.

Category: Anti-Aging
Disclosure of Material Connection: Some of the links in the post above are “affiliate links.” This means if you click on the link and purchase the item, I will receive an affiliate commission. Regardless, I only recommend products or services I use personally and believe will add value to my readers. I am disclosing this in accordance with the Federal Trade Commission’s 16 CFR, Part 255: “Guides Concerning the Use of Endorsements and Testimonials in Advertising.”