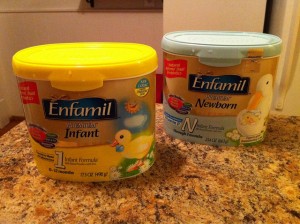 Ever since it has been commercially available, formula manufacturers have made an attempt to equate formula with breast milk.


Let me clarify that I understand that not every new mom will be able to nurse. However, many times the problem is not an unfixable problem. Rather, the new mom needs to be matched with a non-hospital based lactation consultant (maybe I’m biased, but they just don’t seem as motivated) to make sure that every avenue is explored. Formula needs to be the LAST option, not the first.

That being said, the question arises as to which type of formula if nursing is really not an option. Personally, I think that both soy and dairy based formulas are a problem. It is too much of the same proteins getting thrown at a developing immune system again and again and again, day after day. For this reason, I recommend a hydrolyzed formula like Nutramigen or Alimentum. These formulas are “pre-digested” and have less proteins for an infant’s delicate immune system to react to.

To further complicate the issue, this particular study looks at a pretty surprising link between soy based formulas and seizures. Admittedly, this relationship came as quite a big surprise and had been forwarded to me by a colleague who knows that I have an interest in seizures. In the study, researchers looked at the influence that infant formula had on seizures in a population of autistic children. Here’s what they found:

The authors seem to blame the phytoestrogens in soy for the lowering of seizure threshold in this study. However, there is extremely scant evidence for any type of relationship between phytoestrogens and seizures in the medical literature (2 studies to be exact, both on rats and done by the same author). Besides that, I just don’t know that I’ve come across a mechanism by which phytoestrogens could contribute to seizures.

However, from this study, there is a strong suggestion that soy-based formulas played a role in the risk of certain types of seizures. I just disagree that it is caused by the phytoestrogens. Rather, minerals like manganese (known to be higher in formula) could play a role as well as the development of a food allergy to soy from too much exposure to the same protein over and over.

Either way, it would seem that this is yet another reason for parents to do everything they possibly can to support the use of exclusive breastfeeding for at least 3 months, preferably 6-12 months.