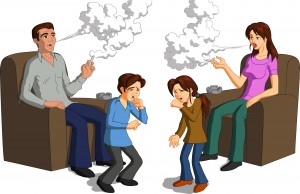 I grew up in a household with two smoking parents. I was the one hanging my head out the car window with the dog.

I can’t go back and change the fact that my parents smoked.  Luckily, their smoking did not influence me to begin my own life-draining habit.  So I escaped the damage.

Or so I thought.

I’m pretty sure the days of parents blowing smoke directly into their children’s faces for laughs are pretty much over.  These days, this same act would almost certainly be accompanied by a visit from child protective services.  But even the most conscientious of smokers can’t protect their children from damage.  This is because few smokers seem to be aware of the concept of third-hand smoke.  Sure, we all know about secondary smoke and passive smoking.  And if you do your best to not smoke around your kids and not smoke in the car you’re going to fully insulate your kids from your bad habits.

Cotinine is a compound that shows up in the blood of those who have been exposed to cigarette smoke.  This includes both smokers and the children of smokers.  The higher to cotinine levels, the higher the exposure.  With that in mind, if you are a smoker and you care about your child or children’s health (which I’m sure you do), then you need to pay attention to this particular study.

In it, researchers looked at the carotid arteries of adults who had been exposed to cigarette smoke TWENTY-SIX YEARS earlier.  Here’s what they found:

This is not good news.  This means that the damage to the blood vessels begin as a child as a result of this early exposure to indirect smoke.  And, in all likelihood, it is an ongoing process.  The hardening of the arteries does not happen as a child, but rather is the end result of a decades-long progression of the damage that started way back when.

But it gets worse:

If you are a parent who smokes, you need to take a hard look at just how much of an effect this is going to have on your kids.  And it’s not an IF, it’s a HOW MUCH.  And we can see that, even it you do not directly expose your kids to cigarette smoke, they are suffering the damage of your lifestyle choices.

Categories: Healthy Kids, Heart Disease
Disclosure of Material Connection: Some of the links in the post above are “affiliate links.” This means if you click on the link and purchase the item, I will receive an affiliate commission. Regardless, I only recommend products or services I use personally and believe will add value to my readers. I am disclosing this in accordance with the Federal Trade Commission’s 16 CFR, Part 255: “Guides Concerning the Use of Endorsements and Testimonials in Advertising.”