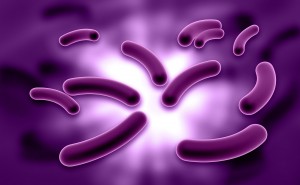 A large chunk of the probiotic-popping population uses them only after a course of antibiotics, but would you be better off taking probiotics on a regular basis?

Oh–and they didn’t have antibacterial soap.

We live in such a sterile environment from birth to death that our traditional exposures to beneficial bacteria has almost been completely wiped out.  Couple this with antibiotic use in farming and antibiotics being given out with the lollipops at the pediatrician’s office and you can pretty much guarantee that the bacteria we should have cohabitating with us are consistently being annihilated.

This leaves our immune system without balance and proper training and it also leaves room for less-than-desirable bacteria to grow in places we don’t need them to grow.  Kill off Lactobacillis with antibiotics (or antibacterial mouthwash) in the pharynx (back of the throat) and Staph and Strep bacteria have a party, increasing your risk of ear infections and sore throats.  And guess what we use to treat these conditions?

Kind of circular, don’t you think?

Back to my original comment.  Society still considers the use of probiotics to be limited to using them after a course of antibiotics or using them with antibiotics to prevent antibiotic-associated diarrhea.  Here’s a newsflash:

Which brings us to this particular study.  In this interesting little tidbit of medical literature, researchers looked to see whether the use of the probiotic Bifidobacterium longum R0175 (given as a microencapsulated product) would affect the absorption of the protective flavanones from orange juice (specifically, hesperetin-O-glucuronides, naringenin-O-glucuronides, and hesperetin-3′-O-sulfate). Here’s what they found:

Having the right bacteria growing in your gut gives you the power to extract more protective compounds from the foods you eat.  How’s that for a statement?

Let’s change the context: A single course of antibiotics has the power to destroy your ability to fully extract the true benefits of the foods you eat, increasing your risk of conditions like obesity, diabetes, heart disease, Alzheimer’s and cancer.

THAT is a strong statement.

In the meantime, it certainly makes good sense to find a good quality probiotic and consider taking it on a daily basis, not just after you’ve wiped out your bacterial flora from yet another course of Cipro.

Category: Probiotic
Disclosure of Material Connection: Some of the links in the post above are “affiliate links.” This means if you click on the link and purchase the item, I will receive an affiliate commission. Regardless, I only recommend products or services I use personally and believe will add value to my readers. I am disclosing this in accordance with the Federal Trade Commission’s 16 CFR, Part 255: “Guides Concerning the Use of Endorsements and Testimonials in Advertising.”