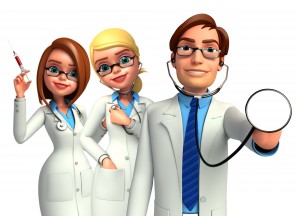 Don’t get me wrong. I don’t inherently have a problem with cardiologists. But, for heart disease to be almost entirely preventable and remain the #1 killer in the industrialized world, we’ve absolutely dropped the ball.

I just don’t see any excuse for a clearly preventable disease to be the #1 killer.

And I cannot accept the fact that medicine is doing better at preventing cardiac deaths (largely due to technology saving lives when the fecal matter hits the fan).  We are doing absolutely awful at preventing cardiovascular disease.

This is in the face of a truly massive amount of evidence on how to prevent cardiovascular disease using lifestyle.  Maybe cardiologists are really spending the time needed to educate their patients about the best lifestyles to drastically lower the risk of having a heart attack or stroke and patients just aren’t listening.  Or maybe mainstream medicine is so caught up in procedures and prescriptions that they have let lifestyle advice to patients fall to the wayside.

The answer likely lies somewhere in between.  I think society is just as heavily to blame because we have created an illusion where medicine actually fixes things.  You do not need to exercise or change your diet because the drug you are taking has lowered your blood pressure, stopped your irregular heartbeat or lowered your cholesterol.  And when that doesn’t work you can go in for a quick in-and-out Roto-rooter procedure and you’re good to go.

If society really knew just how little these approaches really help things might change.  And I think that the foundation for this perceptual change needs to begin with the cardiologists.  It is a profession that needs to stand up and work as hard as possible to destroy itself.

While destroying itself sounds a wee bit, well…self-destructive, this is the way our office functions when it comes to chiropractic care.  I tell patients that it is our job to destroy the practice by pushing for patients to become more active, eat right, treat injuries appropriately and engage in positive musculoskeletal behaviors like yoga.

While it don’t think it will ever happen, it’s still the attitude that we maintain every day.

Cardiologists need to hop on board with this attitude and take a good hard look at what kind of information they are giving their patients.  It would be hard for any professional to look at a client, customer or patient and tell them straight on that he or she has little to offer.

Certainly cardiologists have procedures they can offer to patients.  And, at the end of it all, there is absolutely no doubt that cardiologists are amazing at saving lives.  But they just seem to have a hard time diverting current patients from needing that end-of-the-line lifesaving procedure.

I thought all of this would be a good primer for this particular study.  In it, researchers looked at cardiac outcomes during 2 large, national cardiology conferences over the course of 9 years.  They then compared these same outcomes to 3 weeks before and 3 weeks after the conferences to see how rates compared.

One would think that, with hospital cardiologists being out of town during these big conferences, it would spell trouble for patients who have heart disease during these time periods.

But here’s what they found:

Not sure that there’s any other way to look at this other than saying that there is a chance that teaching hospitals may be doing slightly more harm than good when it comes to the cardiovascular departments.

As an example, it is estimated that half of the non-emergency cardiac stenting procedures are unnecessary.  Considering that these procedures have risks associated with them, it would not be a surprise to see less procedures leading to less deaths.

In an area that has several teaching hospitals, I can assure you that the perception of these teaching hospitals by patients is very high and many will bend over backwards trying to get into them for their problems.

That just may not always be the best idea.  The bottom line is that, even in prestigous teaching hospitals, your cardiovascular health may be better off where it has always been–inside you.

Categories: Heart Disease, Uncategorized
Disclosure of Material Connection: Some of the links in the post above are “affiliate links.” This means if you click on the link and purchase the item, I will receive an affiliate commission. Regardless, I only recommend products or services I use personally and believe will add value to my readers. I am disclosing this in accordance with the Federal Trade Commission’s 16 CFR, Part 255: “Guides Concerning the Use of Endorsements and Testimonials in Advertising.”