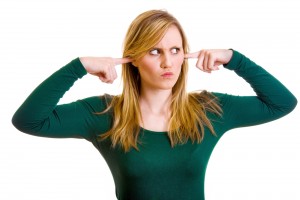 Tinnitus. That annoying little ringing that you can always hear in your brain that nothing seems to help. To make it worse, it always seems to get worse just when you’re trying to fall asleep at night.

And treatments are few and far between and usually involve some type of hearing aid to counterbalance the frequencies in your brain (called amplification) to give the brian the stimulation that it may be missing.

The exact cause of tinnitus has not been nailed down, but it likely involves some type of damage to the acuoustic nerves, whether from a chemical insult (caused by “ototoxic” compounds like certain antibiotics, diuretics, chemotherapy drugs and some anti-inflammatories), acoustic damage (remember that Ozzy concert that left your ears ringing for days?) or metabolic damage.

While the focus of this article is going to be on treatment for tinnitus once it’s present, I need to take some time right now to cover prevention.

Avoiding ototoxic drugs is obviously a pretty cut-and-dry proposition.  And while not every antibiotic and every anti-inflammatory is going to cause hearing damage in every case, my easy answer would be to avoid them except in the most needed situations (i.e. when you can’t get to your chiropractor, like, right now…).

To minimize the damage caused by load exposures, wear hearing protection when possible (shooting, working machinery, riding a motorcycle, etc…).  In case you really want to go to that Nickelback concert and prefer not to be the only geek with massive headphones who is NOT in charge of the soundboard, there is some evidence that you can protect acute hearing damage with antioxidants like ginko biloba, magnesium, zinc, vitamin C, N-acetyl cystein (NAC) and coenzyme Q10 (CoQ10) when taken before the exposure.

The biggest one to be aware of, however, is hearing damage and tinnitus caused by metabolic damage.  Most notably prediabetes.  Yep–that demonic situation where your lifestyle is clashing with your genetics, leading to a state of metabolic mayham, increasing your risk of pretty much everything.  Almost all patients who note tinnitus on their intake paperwork are very surprised to hear that ringing in the ears can be a decades-early warning sign that you are on the path to diabetes.

How does this happen?  At its root, prediabetes will effect the ability of every cell to use energy efficiently.  In same cases the cell itself can become toxic from glucose overload.  If this process of cell damage is occurring in every organ of the body, which organ system do you think is going to be the most sensitive?  In other words, which organ system do you think would send you warning signals first?

The easiest way to prevent this metabolic damage to your nervous system is to live an anti-diabetic lifestyle (you can read more on this by checking out my eBook on Diabetes by clicking here).

But let’s say you’re reading this just a few years too late and the metabolic cat is out of the bag and there has been too much damage to your acoustic nerves to repair.  In this situation I would direct you to this particular article.  In this article researchers use an animal model to determine that blocking the NMDA receptor in mice has a postive effect on tinnitus.

If you’re already completely comfortable with the NMDA receptor and what it does, than you should be able to breeze through the article. For the rest of us, let me see if I can put this into planer language.

The N-methyl-D-aspartate (NMDA) receptor is a receptor on the cells of your brain that play a role in things like memory, behavior and the ability of your brain to make new brain cells (synaptic plasticity).  If you’d like to get a really good idea of what happens to the brain when the NMDA receptor is attacked by the immune system, the non-fiction book Brain on Fire is an excellent read to give you an idea of just how much havoc can occur.

Here are a few quick facts about the NMDA receptor:

With all this confusing stuff in mind, the study should be a wee bit clearer.  In it, researchers found that by blocking the NMDA receptor, tinnitus symptoms in rats could be reduced.  While the compound used in this study is not something you could run down to Costco and buy right now, the concept does lead to some potential treatments to help with tinnitus:

While this information may be a bit confusing, it does begin to show you the way by which you CAN have control over your tinnitus using natural approaches that focus on lowering the levels of the excitatory brain compound glutamate.

Category: Prediabetes
Disclosure of Material Connection: Some of the links in the post above are “affiliate links.” This means if you click on the link and purchase the item, I will receive an affiliate commission. Regardless, I only recommend products or services I use personally and believe will add value to my readers. I am disclosing this in accordance with the Federal Trade Commission’s 16 CFR, Part 255: “Guides Concerning the Use of Endorsements and Testimonials in Advertising.”