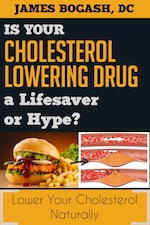 Your microbiome and your cholesterol

Cholesterol lowering drugs seem to have lost some of their luster. Can’t say I’m disappointed about that little tidbit.

Due to staggeringly successful marketing efforts on the part of the drug companies (most notably Pfizer for Lipitor), drugs to lower cholesterol became one of the most successful drugs ever produced. Unfortunately, this had little effect on patient health because of the truly dismal benefits of the statin class of drugs.

One percent improvement. Yup. That’s about all you can expect from taking a statin drug to lower your cholesterol. Pretty much sucks no matter how you look at it.

The cholesterol story has become quite interesting in the past few years. It took some very large studies to put the minimal benefits of statin drugs into perspective, especially in light of the risk of diabetes from this class of drugs.

I think the findings that statins increased the risk of diabetes (ironically, especially in those who were at lower risk in the first place) has finally opened medicine to the idea that this class of drugs is not the miracle drug we once thought it was.

To see how far it’s come, the most recent cardiovascular disease prevention guidelines do NOT include cholesterol as a risk factor nor are there recommendations to limit dietary cholesterol intake.

My how far we’ve come.

Still frustrating, however, when you consider that these recommendations NEVER should’ve been present in the first place. It’s like medicine is just now waking up to the idea that the “statins to lower high cholesterol” approach is just not a good idea.

I’m not saying that high cholesterol is a goal we should shoot for. Quite the opposite. It’s just that cholesterol is just one risk factor among many and putting on blinders to look just at total cholesterol is a bad idea.  To give you an idea of how crazy the idea of using a drug to single-mindedly lower cholesterol is, this particular study should do the trick.  You see, cholesterol levels are merely a reflection of the health of the body. That means that literally hundreds of factors will work together to create the numbers that you see on your blood test.

The bacteria in your gut.

Yup. As if we didn’t already link the bacteria in your gut to pretty much every other aspect of health. Now we can chalk up your lipid levels on the list. Here’s the specifics of the study:

The study went into FAR more detail than this as far as the relationship between specific bacterial species, BMI and lipids, but suffice it to say that the results were consistent with prior studies on this same subject.

So what does this mean? It means that someone, somewhere is going to try to financially capitalize on this relationship. You can bet this will be along the lines of fecal transplants (and now for the collective “yuck…”), which is already well on its way to being an acceptable treatment for C. diff infections.

To me, this means that diversity is key. I have said this time and time again and always relate it back to antibiotic use in all but the most life-threatening situations.

Antibiotics WIPE OUT DIVERSITY and it takes years to recover, if ever. IF EVER. I can not state this more strongly—if you are the type of person who runs out and gets an antibiotic prescription for acne, sinus infections, urinary tract infections, sore throats, ear infections or upper respiratory tract infections (ALL of these have very little evidence of effectiveness and can be better managed naturally), even if it is only once every few years, you are absolutely, positively, destroying the diversity in your gut and with it, your long term health.

Thinking that you are OK after antibiotics by just following up with probiotics for a week or two is old school. Taking probiotics is just the first 100 yards of a marathon. But if you can point me to a probiotic with 200+ strains that will survive through to GI tract to the lower regions of the intestines, I’ll revise my thinking on this issue.

Until then, avoid antibiotics unless you are on your deathbed with a fever of 106.

Categories: Cholesterol, Probiotic
Disclosure of Material Connection: Some of the links in the post above are “affiliate links.” This means if you click on the link and purchase the item, I will receive an affiliate commission. Regardless, I only recommend products or services I use personally and believe will add value to my readers. I am disclosing this in accordance with the Federal Trade Commission’s 16 CFR, Part 255: “Guides Concerning the Use of Endorsements and Testimonials in Advertising.”