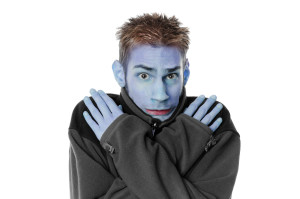 What if I told you that you could lose weight without doing a darn thing, so long as you had some help from a friend?

Sounds like an ad for the newest wonder supplement for weight loss.  Get this great new weight loss product for $3 (just pay $59.95 for shipping and handling) with a money back guarantee (not including the S & H).

But no.  This is something far more legit (and free, by the way…).

But first, we need to review the different types of body fat.  And not just the unwanted fat that hangs around your middle and organs and increases your risk of all those nasty chronic diseases.  There are three types of body fat:

Until recently, scientists thought the brown fat was only present in babies and bats.  As humans age, they lose brown fat, never to get back those heat-generating, calorie-burning fat cells.

Or, at least that’s what we thought.  Turns out that we can actually “brown” our white fat cells, changing the makeup of the fat cell so that it begins to burn calories to generate heat.  On the flip side, certain lifestyle choices have been shown to lower the amount of brown fat.  Some of these are very simple to implement.  Most notable of these is the use of artificial sweeteners (just in case you’re STILL using them to lose weight, this little factoid should wake you up).  I’ve covered many of these factors in a previous article that can be read by clicking here.

The one factor that I need to review in the context of this blog article has to do with exposure to cooler temps.  In a small study, volunteers who were exposed to cooler temps (60 degrees F) for 6 hours per day increased his or her brown fat by a respectable 37% in 10 short days.

Pretty cool.  It certainly makes sense for our bodies to raise the internal thermostat (so to speak) when exposed to short term cold.  It’s about adaptation.  But how exactly does this happen?  This group of researchers turned to mice to get a better grip on how this happens.

And the results are pretty surprising.

In this particular study, researchers exposed mice to slowly colder temps over the course of a month and watched how the mice’s bodies responded.  But they ALSO kept an eye on the bacteria in the gut.  Here’s what they found:

To make this even more interesting, the researchers were able to pinpoint a particular bacteria, Akkermansia muciniphila, as having the most potent effect.  Which may not be surprising–I have covered this bacteria before in its ability to fight off diabetes and its relationship with well-trained athletes.

Back to my opening statement.  Yes, you can lose weight during next to nothing.  All you have to do is find a friend to freeze his or her butt off for 10 days and then do a fecal transplant from your cold-adapted friend.

Better be a pretty good friend….

Categories: Obesity and Weight Loss, Probiotic
Disclosure of Material Connection: Some of the links in the post above are “affiliate links.” This means if you click on the link and purchase the item, I will receive an affiliate commission. Regardless, I only recommend products or services I use personally and believe will add value to my readers. I am disclosing this in accordance with the Federal Trade Commission’s 16 CFR, Part 255: “Guides Concerning the Use of Endorsements and Testimonials in Advertising.”