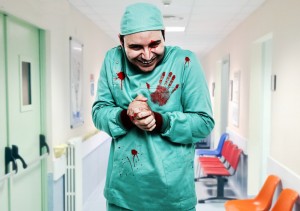 Everyone knows medical errors occur, but few understand just how many there are. In 1984 a study came out noting that we lose about a Boeing 747’s worth of people DAILY.

The estimated number was close to 98,000 people per year.  And these were conservative, low-end numbers.  AND these are deaths from clear-cut medical errors, not taking into account the deaths due to unexpected adverse effects from properly prescribed medications.  Or deaths during surgical procedures that might not have been necessary.  Or deaths that occurred due to a medication but not linked to a medication (how many Vioxx users died of a heart attack but Vioxx never got the blame?).  Or deaths from counterfeit drugs from India that caused an unexpected fatal reaction.

I could go on, but you get the idea.

In this current review, researchers updated the information with studies that had been published more recently (2008-2011).  You’d better be sitting down; here’s what they found:

You’ll need a calculator with scientific notation to figure out the number of those seriously harmed.  Again, I would refer you back to the paragraph above noting how many deaths we are actually missing here.  I have always stated that a hospital is a dangerous place to be, but based on this study that’s a drastic understatement.

Just in case all of this wasn’t depressing enough, this is a good time to bring up another study looking at the financial costs to the health care system from medical errors.   This review noted a few interesting facts:

Let me put this into perspective.  A patient comes into my office for treatment.  In the process of treating them I spray furniture polish on the floor and have the patient walk around in his or her socks (ok…so maybe this is an agregious example, but you get the point…).  Invariably, the patient biffs it, capturing some serious air time in the process of landing on his or her buttocks.

Luckily, I can treat the damage associated with this preventable condition as well AND I get paid for this additional treatment.  What a racket.  But this is essentially what is happening.  Society is paying for medical care to deal with the fallout from medical care.  However, if you’re lucky, you now have an Affordable Care Act health care plan that will make everything ok.

I’m not saying to we can eliminate medical errors, but society’s almost complete reliance on drugs and surgery as treatment options has got to change.  These options should be last-ditch efforts, not front line therapies.  They are too dangerous and too costly to use them in the manner that we use them in medicine today.

Categories: Health Care Costs, Hospital Care
Disclosure of Material Connection: Some of the links in the post above are “affiliate links.” This means if you click on the link and purchase the item, I will receive an affiliate commission. Regardless, I only recommend products or services I use personally and believe will add value to my readers. I am disclosing this in accordance with the Federal Trade Commission’s 16 CFR, Part 255: “Guides Concerning the Use of Endorsements and Testimonials in Advertising.”