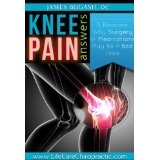 The idea of using natural approaches for knee pain has been around for quite some time.  Glucosamine began to hit the scenes when I was still in school.

Yes indeed.  The first clinical trial, while I was in chiropractic school, was on a brontosaurus.  Sure, weight loss would’ve helped and the vegetarian diet was definitely anti-inflammatory, but the real problem was getting them into the MRI scanner for the imaging.

(And, for the paleontology geeks out there, I am aware that the brontosaurus was actually an apotosaurus…)

Ok…so maybe the research hasn’t been around quite THAT long, but there are times when it sure seems like it.  And quite frankly, the research over the years has been a blend of “OK” and negative (as in not helping at all).  Personally, I think this has happened for several reasons:

All of this brings us to this particular study.  In it, researchers set up the details in a slightly different manner than previous studies.  Specifically, they followed 600 patients with knee osteoarthritis for 6 years and determined whether or not they were taking prescriptions (anti-inflammatory drugs, analgesics) and/or a glucosamine/chondroitin supplement.  They then looked at structural changes of the knee (loss of joint space width and cartilage volume).  Here’s what they found:

Overall, this study did NOT look at how much knee pain the participants had, but rather looked objectively at how the knee joint itself was responding to the glucosamine and chondroitin.  And the results are very heartening.

Even more so when you consider that the drugs used to treat knee osteoarthritis symptoms are well-known to actually destroy the lining of the joint you are trying to prevent.  Despite this underlying damage from the medications, this natural approach to joint health was powerful enough to protect.

Category: Knee Pain
Disclosure of Material Connection: Some of the links in the post above are “affiliate links.” This means if you click on the link and purchase the item, I will receive an affiliate commission. Regardless, I only recommend products or services I use personally and believe will add value to my readers. I am disclosing this in accordance with the Federal Trade Commission’s 16 CFR, Part 255: “Guides Concerning the Use of Endorsements and Testimonials in Advertising.”