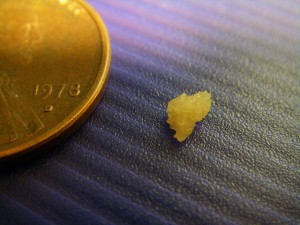 Kidney stones are one of the most painful acute conditions that humans can endure.

Whenever I asked female patients who have had both children and kidney stones which was worse, the answer is always the kidney stones.  Maybe this is because childbirth is a natural process and the body will release endorphins to curb the pain.

Either way, kidney stones are extremely painful and if you just had a kidney stone you are likely willing to do anything to avoid getting another.

Like pretty much everything else in medicine, dogma rules when it comes to advice on lowering your risk of getting another kidney stone.  And frankly, the research that I have come across is pretty limited as well (you can read about some of them in a previous article by clicking here).

What I usually tell patients is that it is clear that a plant-based diet will lower your risk of kidney stones and, despite the long held belief that vitamin C contributes to kidney stones, they do not.

Regular Rantings readers will know that I am not a big fan of the “8 glass of water a day” recommendation (especially when that water is from BPA-laden plastic water bottles) and I have always felt that the need to drink an additional glass of water for every glass of tea or coffee you drink was unneccesary.

Do you really think the Dalai Lama is dilligently drinking a glass of water for every cup of green tea he is drinking?

Looking back at blog posts I did over a decade ago, I was pretty sure that caffeinated beverages needed to be avoided for kidney stone prevention.  But, like a handful of other recommendations over the years, this one is subject to change.  Especially according to this particular study.

In this study, researchers looked at 4982 kidney stone patients to see if caffeine intake had an effect on their risk of developing kidney stones.  Here’s what they found:

Overall, these are pretty strong numbers given the long-given recommendation to avoid caffeinated beverage intake.  So, if you are a kidney stone sufferer, than it’s time to add some tea and / or coffee to your daily regimine.

Category: Kidney Problems
Disclosure of Material Connection: Some of the links in the post above are “affiliate links.” This means if you click on the link and purchase the item, I will receive an affiliate commission. Regardless, I only recommend products or services I use personally and believe will add value to my readers. I am disclosing this in accordance with the Federal Trade Commission’s 16 CFR, Part 255: “Guides Concerning the Use of Endorsements and Testimonials in Advertising.”