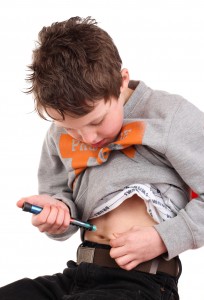 Of all the forms of diabetes, Type 1 in children is the hardest for me to swallow. This is because it does not come from something the child did.


And while there are many things that have been shown to increase the risk of Type 1 diabetes, the parents of these children are generally not aware of many of these risk factors.  Take dairy, for instance.  Society has trained us to think that dairy is a “health” food and should be given to children.  But the research suggests otherwise, finding some clear links between dairy intake and Type 1 diabetes.  How many parents would even think for a second that the “health” drink that everyone recommends (especially the commercials…) would increase his or her little one’s risk of developing a lifelong chronic disease?

Other things like vitamin D deficiency is on the list of things shown to contribute to juvenile diabetes risk.  Viral infections are also on the list, but these are not really as modifiable as the first two risk factors.

In case you’re not aware, juvenile diabetes is an autoimmune condition where your body attacks its own beta cells in the pancreas; the cells that produce insulin to help you handle sugar.  The problem is that once the immune system has its teeth into something, it’s hard to get it to forget about attacking whatever it happens to be attacking.  If your immune system didn’t work this way, you would never build up an immunity to infections you have had in the past and vaccinations would never work.

Enter this particular study.  In it, researchers looked at the ability of vitamin K to help control the immune system that is responsible for attack the beta cells of the pancreas.

Vitamin K is one of the four fat-soluble vitamins and has traditional been thought of as being important for clotting.  But, just like vitamin D, time has demonstrated that vitamin K has many other functions besides blood clotting.  Other functions include bone formation and keeping your blood vessels from calcifying.  All admirable qualities.

Over the past few years, more research has been demonstrating that vitamin K, just like vitamin D, seems to be a major player in the development of autoimmunity and may play a role in bringing back balance to the immune system, which is incredibly important for anyone with an autoimmune disease (like juvenile diabetes).

With this in mind, you can see why researchers had an interest in seeing whether vitamin K could impact markers associated with Type 1 diabetes. They used a compound called streptozotocin (STZ) to damage the beta cells of the pancreas in rats and then gave them vitamin K1 to see if it could protect the rats from the damage.  Here’s what they found:

While this is an animal study, it still seems like pretty darn good news for the type 1 diabetes crowd.  Vitamin K supplementation is safe and inexpensive.  With findings this strong (it wasn’t any one finding, but rather that vitamin K seemed to impact every process along the chain of autoimmune Type 1 diabetes) it makes sense to add vitamin K to your or your child’s regimen if juvenile diabetes plagues your life.

On this same regimen would be other supplements like vitamin D, fish oils and dietary avoidance of dairy as well as an otherwise anti-diabetic lifestyle.

Category: Type 1 Diabetes
Disclosure of Material Connection: Some of the links in the post above are “affiliate links.” This means if you click on the link and purchase the item, I will receive an affiliate commission. Regardless, I only recommend products or services I use personally and believe will add value to my readers. I am disclosing this in accordance with the Federal Trade Commission’s 16 CFR, Part 255: “Guides Concerning the Use of Endorsements and Testimonials in Advertising.”