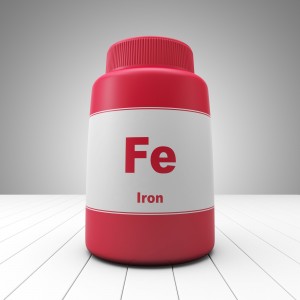 Iron plays a tricky role in your health.  On the deficiency side, anemia creates all sorts of problems.  But the other end has a dark side as well.

Iron’s principle role in the body is to form the anchor to which oxygen binds in the hemoglobin molecule inside of your red blood cells.  It also serves much the same function in the myoglobin molecule within skeletal muscle.  Lastly, iron plays a role in certain enzymes that help with energy production and detoxification (namely the cytochrome family of enzymes).  When iron functions the way it is supposed to all is good.

However, there is a dark side to iron.  Iron is a strong oxidizing agent when it is set free in your body.  After head trauma, for instance, the damaged tissue leaks blood into the surrounding brain cells, releasing free iron in the process.  Being an oxidizing agent, the iron goes on to do what iron does–oxidize and damage the uninjured tissue surrounding the damaged tissue.  This sets up the process of oxidative stress, jeopardizing the ability of brain cells to safely generate the energy they need to function properly.  Fast-forward 5, 10 or even 20 years later and seizures can develop.  This is one of the reasons why head trauma can be a later risk factor for seizures–because of the free iron.

Another little tidbit about iron–it can cause bacteria to reproduce like wildfire.  This is one of the reasons why iron is protected and held on to tightly by your body–so that invading bacteria cannot use the iron to reproduce and do nasty things like kill you.  When it’s not doing its work inside of cytochrome enzymes or hemoglobin, extra iron sits idly by inside of your cells in a storage protein called ferritin.  When your body decides it needs to move iron around from one place to another it uses a different protein called transferrin.  All this means is that iron is not supposed to be running around wild wreaking havoc on your long term health.

But this is iron that is working properly inside of your body, kept away from the mean, bad bacteria wishing to rise up and conquer your immune system.  What about the iron in your gut that is present before it is absorbed?

Turns out this may be a problem.

We are still learning more about the microbiome every single day.  I have recently begun to believe that, while probiotic supplementation is a good idea, it is rarely the only thing needed to combat the ills that come with a bad bunch of bacteria in your microbiome.  Avoidance of antibiotics (unless TRULY life-threatening) and attention to diet are critical.  Stress management.  Strong soluble and insoluble fiber intake.

And, as we begin to find out other aspects of what affects the bacterial balance in your gut, using these new findings to your advantage.  In this case avoiding iron supplementation unless you are sure that it is needed.  A few tips when it comes to iron:

Follow these tips and you are adding another positive piece to the puzzle that is the bacterial microbiome in your gut.

Categories: Diarrhea / Constipation / Irritable Bowel, Probiotic
Disclosure of Material Connection: Some of the links in the post above are “affiliate links.” This means if you click on the link and purchase the item, I will receive an affiliate commission. Regardless, I only recommend products or services I use personally and believe will add value to my readers. I am disclosing this in accordance with the Federal Trade Commission’s 16 CFR, Part 255: “Guides Concerning the Use of Endorsements and Testimonials in Advertising.”