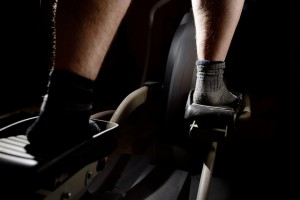 I hate to beat a dead horse, especially if he dropped dead from too much aerobic exercise, but society just does not seem to be getting the point about aerobic exercise.


Quite frankly, we’re doing too much.

I know that many of you are disappointed to hear this. After all, in today’s rush-rush society everyone is getting the recommended 30 minutes minimum of aerobic exercise at least 3 times per week, right? Yeah. Reality check–most Americans still do not have regular exercise as part of their lifestyle routine. And, even if they are, it’s likely they are not doing the most beneficial type.

The research continues to support a short-burst, high intensity, aerobic activity rather than a single bout of light to moderate intensity workout. Personally, when I’m doing one of my short bursts on the treadmill or elliptical, I’m going all out for that 30 second session. It’s not a leisurely pace at which I could maintain a conversation on my cell phone to some out of the country customer service rep for my mortage. When I’m done with my burst, it takes some time (1-2 minutes) to recover somewhat from the oxygen debt I have accumulated.

This particular study is yet another one to chalk up for the short-burst aerobic crowd. This small study looked at 11 obese individuals (aged 18–35 years) who were prediabetic and had them performed differently on three different days:

Researchers than checked sugar and insulin levels in the bloodstream. Here are the results:

While this study was not on high-intensity aerobic activity, it does demonstrate the benefit of breaking up the exercise routine into small groups instead of a single time period.

How do YOU spend your time exercising??

Categories: Diabetes (Type 2), Obesity and Weight Loss, Prediabetes
Disclosure of Material Connection: Some of the links in the post above are “affiliate links.” This means if you click on the link and purchase the item, I will receive an affiliate commission. Regardless, I only recommend products or services I use personally and believe will add value to my readers. I am disclosing this in accordance with the Federal Trade Commission’s 16 CFR, Part 255: “Guides Concerning the Use of Endorsements and Testimonials in Advertising.”