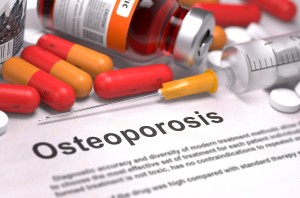 Forteo was approved in 2002 as a one-time injection for osteoporosis that was the first new bone density medication to come along in awhile.

When I first heard about this drug I had my concerns.  Mainly because of the increased risk of cancer from forcing bone to do what it was not meant to do.  Of even bigger concern is that any “bone density medication approach” to low bone density is just not the right approach.  These medications do absolutely nothing to fix the problem that ate away at your bone in the first place.

Bone is not a static tissue, merely hanging around to provide support to keep you upright and attach muscles to.  The past decade has been filled with research on just how much bone is integrated in with the rest of your body.  As crazy as this may sound, your bones are intricately connected to your GI tract, your risk of diabetes and your fertility.  And probably much more that we aren’t aware of just yet.

And, if the bone density medication that your doctor chose just happens to be the injection for osteoporosis, aka Forteo (teriparatide), the problem may be much larger than you know.

You see, Forteo doesn’t fix the problem (I know, I know–I’ve said this at least 4 times already).  So what happens AFTER you’ve had your injection for osteoporosis?  Turns out that, if you are NOT put on ANOTHER drug for bone density after your injection, you lose bone even faster.

So, while the injection for osteoporosis did indeed lead to an increase in bone density, merely TWO YEARS later, their bones were headed south.  It would not be much of a stretch to imaging that these women were going to be worse off then before they started Forteo just a few short years down the line.

The key is understanding that bone density should be checked decades before it hits the crisis stage.  Our office has done bone density testing for years now and promote patients in their 20s, 30s and 40s to have their bone density checked.  We’ve identified more than a few patients whose bone density was 5 or even 10% lower than what it should be for his or her age.

At this point, the changes need to be less dramatic and can sometimes be as simple as increasing intake of vitamin D.  Sometimes it requires a full lifestyle overhaul.  Either way, your best bet is to find out where YOU stand, so you can do something about it before it becomes a crisis and medications are used that may leave you worse off then when you started.

Category: Osteoporosis Cures and Bone Health
Disclosure of Material Connection: Some of the links in the post above are “affiliate links.” This means if you click on the link and purchase the item, I will receive an affiliate commission. Regardless, I only recommend products or services I use personally and believe will add value to my readers. I am disclosing this in accordance with the Federal Trade Commission’s 16 CFR, Part 255: “Guides Concerning the Use of Endorsements and Testimonials in Advertising.”