Heartburn, reflux, indigestion. Regardless of what you call it, it sucks. Especially if it keeps you from eating the foods you like.

Worse, there are few things that cause me to pull my hair out of my head (what’s left anyway–these days I need tweezers and it’s not so gratifying…) then patients who have been on acid-suppressing drugs for YEARS.  If you look at the little white insert that came with the prescription you will see that this class of drugs is for short-term use only.

And yet I had a 40-something-year-old new patient just last week who was told by his doctor that he would need to take these for the rest of his life.  And we’re going to assume that “the rest of his life” was going to be longer than 3 months.  Clearly many doctors do not seem to understand the dynamics of digestion and how important it is to good health.

On the flip side, if you have a bleeding ulcer, acid-blocking drugs will save your life.  You’ll get no argument from me on that one.  But for almost every other situation, acid-blocking drugs will, without question, cause more problems than they will solve.  I have covered the functions of stomach acid in the past, but here’s the brief list again:

Often, reflux-type symptoms are from poor digestion.  Support digestion with digestive enzymes and reflux can improve dramatically.  I have seen this happen time and time again in practice.  However, in case this doesn’t work, there might be an even simpler solution.

Common sense could tell us that increased pressure in the abdomen would push up the contents of the stomach and lead to reflux.  But it’s nice to have the theory played out in a real live overpriced study.  In this particular study, researchers looked at a group of 24 volunteers who had no symptoms of heartburn, half with normal waistlines and half with increase waistlines.  They were then fed meals with a waist belt on and another meal at a different time with no waist belt on.  Here’s what they found:

Overall, both the waist belt and being overweight led to more acid being exposed to the esophagus for a longer period of time.  Keep in mind that none of the volunteers in this study had symptoms despite the fact that the esophagus was clearly being damaged by acid.  Obviously maintaining an ideal body weight is a good idea for reflux, but it seems like avoiding tight-waisted pants or wearing a belt might be a good plan to follow.

Share | Tweet | Share | +1 | print | email
Categories: Digestive Complaints, Obesity and Weight Loss
Disclosure of Material Connection: Some of the links in the post above are “affiliate links.” This means if you click on the link and purchase the item, I will receive an affiliate commission. Regardless, I only recommend products or services I use personally and believe will add value to my readers. I am disclosing this in accordance with the Federal Trade Commission’s 16 CFR, Part 255: “Guides Concerning the Use of Endorsements and Testimonials in Advertising.” 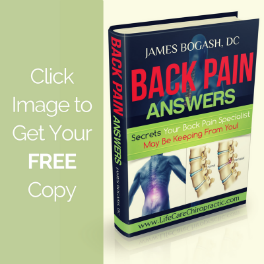 My Most Popular Posts

What Others Are Saying

I had severe and limiting use of my right arm due to a fall while hiking, after a few sessions, I no longer have pain in my shoulder area and can raise my arm high in the air and rotate my shoulder for a full range of motion.

Dr Bogash has helped me with a lot of problems. One that comes to mind would be the time I slammed the trunk of my SUV down on my head. I had a bad headaches, neck aches and shoulder aches. Dr. Bogash worked on all the problem spots and I was able to get on with my activities like before. I am accident prone and have found the right DR to stay on top of my numerous concerns.

Sign up for Dr. Bogash’s Modern Health Myths and instantly receive a free copy of the eBook: