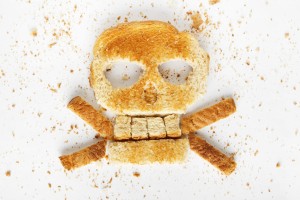 Here’s the reality of human physiology; we will NEVER understand how complicated it is.   Gluten sensitivity’s effect on the brain falls under this category.

There’s no doubt that many of us has a grasp on small amounts of how the body works, but the big picture is just too big for any one of us to understand fully.  It’s kind of like–I can drive around here in Phoenix quite well and know where I’m at or at least how to get to where I need to go.  But drop my in Dubai without a map or GPS and I’m pretty much screwed (especially since my Arabic is a little rusty…).

That’s a pretty good analogy to the human body and its complexity.  The most that any of us can hope for is a glimpse of insight into how it works and how we, as physicians, can help patients heal and live full lives.

This is one of the reasons why my passion has always been normal physiology and how the lifestyles we are SUPPOSED to be living impact that.  I figure it’s easier to match how we are designed to live then to figure out the details of that process.  Sort of like recommending more vegetables in your diet (because it’s the right thing to do) instead of understanding how glucosinolates in broccoli assist detoxification of environmental contaminants.

Just to complicate things even more, every system in the human body communicates and interacts with every other system.  The connections between the gut and the brain are particularly strong.  This is why treatment for any “brain disorder” should always include a look at the gut.

While this relationship may seem a little strange at first glance, the reality is that the gut is considered the body’s “second brain” since its production of neurotransmitters is as heavy as the brain.  As an example, 2/3 of the body’s serotonin is produced in the gut NOT the brain.

To further complicate matters, your DNA codes for about 25,000 different genes that make all kinds of different proteins to make sure your body is working the way it is supposed to.  Just in case that sounds a little overwhelming, the bacteria in your gut, collectively, have about 3 MILLION genes, all equally capable of making proteins that effect your health and risk of disease.

With this as a background, we can now look at just how absolutely jaw-dropping amazing this particular study is.  It brings together so many of these concepts that it is going to make your head spin.  In this small study, researchers looked at 19 children who had newly diagnosed celiac disease confirmed through an intestinal biopsy and followed them for 6 months while on a gluten free diet.

In these children with gluten sensitivity, there were some disturbing findings:

These findings clearly indicate that gluten (essentially a gastrointestinal condition) was having very definite negative effects on the brain.  And make no mistake–these are serious conditions to be found in children.

Luckily, the researchers then found some amazing things that were affected by 6 months of a gluten free diet:

As I mentioned, this is a small study.  However, it does link to and support other studies that have found an increase in migraine headache in those with gluten sensitivity, which gives it more weight.  While many have called the gluten free diet a “fad” I think these naysayers have managed to miss much of the medical literature linking gluten with a long list of health problems.

Even better, this is a DIETARY change with no real downside or side effects.  It is an approach that truly gets to the root of the problem rather than just glazing over the symptoms with dangerous medications with a long list of side effects.

Also, while this study only evaluated biopsy-confirmed celiac disease, which is at the far end of the spectrum, you can bet that lesser degrees of sensitivity will also link to neurological damage.  It will just be more subtle.

Categories: Celiac Disease, Migraine, Sleep Apnea
Disclosure of Material Connection: Some of the links in the post above are “affiliate links.” This means if you click on the link and purchase the item, I will receive an affiliate commission. Regardless, I only recommend products or services I use personally and believe will add value to my readers. I am disclosing this in accordance with the Federal Trade Commission’s 16 CFR, Part 255: “Guides Concerning the Use of Endorsements and Testimonials in Advertising.”

One thought on “Children, Gluten, Sleep Apnea and Headaches, Oh My!”