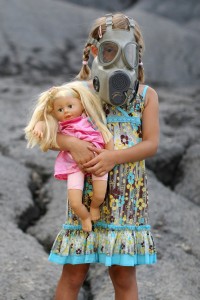 Chemicals are everywhere in our world.  I’ve said before that we live in a toxic soup, and that absolutely includes our children.

Our kids have a particular susceptibility to toxins in our environment because their detoxification ability is not as strong as an adult’s.  To make this worse, we are particularly sensitive to the plight of children and the scary fear that their pajamas may burst into flames at any given moment.

The problem is that it requires chemicals to meet the standards that are required.  There are natural materials that a naturally flame-resistant, but industry doesn’t seem interested in using these fibers.

Still all of this would be OK if we are saving lives without the cost of toxic exposure to our children while trying to prevent the almost 200 burns due to clothing in the US per year.  The current standards require the materials to resist an actual flame for a certain period of time.  Clothing that fits close to the skin is far less likely to catch on fire and does not require the higher flame resistant standards.

In other words, the use of chemicals to meet flame resistant standards is mandated, but any safety testing for these same chemicals is not required.  Quite a catch-22.

(The following information is from a viewpoint article written by Dr. Eric Hecht, Dr. David Landy and Julien Thomas)

As a way of history to show just how backwards this is, the Consumer Product Safety Commission (CPSC-the government entity that oversees this type of thing), in 1977 banned the use of CFR 2,3-dibromyopropyl phosphate one year after it was introduced.  Unfortunately, it turns out that this compound was absorbed through the skin and had the potential to cause DNA mutations.

After this, the polybrominated diphenyl esters (PBDE) took over and became the most widely used flame retardant.  That was until 2004 when concerns again arose over the toxicity of certain PBDE and these were likewise removed from the market.  These concerns ranged from endocrine disruptions, neurodevelopmental disorders and cancer.

Just in case you thought this was the end the debacle, another PBDE called decabromodiphenyl ester was banned in several states in 2013 over the same concerns.

Overall, some billion pounds of flame retardants are used annually in the US, where the typical household contains several pounds in clothing, furniture, electronics and insulation.  As these materials break down, they attach to dust particles and can make it into ours and our children’s bodies by this route as well.  This results in children in the US having toxic levels of flame retardants that are some 10 TIMES higher than other countries.

And our pets?  That’s even worse since they are much closer to the sources of these chemicals.

All of this wouldn’t be an issue if these toxic chemicals were not linked in children to neurodevelopmental disorders, lower IQs, ADD and other behavioral problems.

The regulation of these compounds is slim, and a huge chunk were grandfathered in when the Toxic Substances Control Act was passed in 1976.  Overall, this is a scenario where you need to be proactive in protecting your children from toxic exposures rather than trusting in the manufacturers and the government to ensure that products used are safe for your family.

Here are some tips:

For a long time, I considered the foundation to health to consist of diet, exercise and stress management.  Unfortunately, over the years which growing use of chemicals everywhere in our environment, I’ve had to add an environmental tab to this foundation.  The problem with this aspect is that is remains largely unknown to most of us, yet has a direct effect on health.

Everyone knows that the McDonald’s Big Mac they are going to eat is bad for them, but few consider the hidden danger of returning to a car after that fast food meal that has been baking in the sun for a 1/2 hour and breathing in the toxic phthalates that have been off-gassing in the heat.

Categories: Environmental, Healthy Kids, Toxicity
Disclosure of Material Connection: Some of the links in the post above are “affiliate links.” This means if you click on the link and purchase the item, I will receive an affiliate commission. Regardless, I only recommend products or services I use personally and believe will add value to my readers. I am disclosing this in accordance with the Federal Trade Commission’s 16 CFR, Part 255: “Guides Concerning the Use of Endorsements and Testimonials in Advertising.”