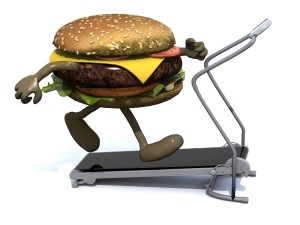 I hear it all the time.  “I’ll just exercise it off.”  Or, someone will say something like “he’s an athlete, he’ll burn it off.”  All of this over the “comes-with-a-hand-truck” sized drink at Starbucks.

If only it were that simple.  If only all you had to do was exercise more to burn off any excess calories you took in, regardless of the quality of those calories, obesity and diabetes would be a rare thing.  But have you ever looked down on the “calories burned” indicator on the elliptical or treadmill you’re using?  Disappointing, isn’t it?  All that work and you’re lucky if you’ve burnt off enough calories to account for even half of a small Starbucks mocha.

What about those crazy high activity runner?  Let’s say you are a marathon runner in training and you just finished a 1/2 marathon.  That’s approximately 1200 calories burned.  While that sounds like a lot, it’s not even enough to burn off the calories in a Big Mac Value Meal.

So why even bother with exercise?

Because, quite frankly, it’s the right thing to do.  The benefits of exercise cuts across every organ and every disease state.  But it has little to do with the calories that you burn during exercise.  One benefit of consistent exercise is that it does increase the amount of lean body mass that you are carrying around.  Muscle, unlike fat, burns off quite a bit of calories.  This is reflected in your basal metabolic rate (BMR)–the more muscle mass you have, the more calories you burn at rest.

Despite all of this, the benefits of exercise do not stand on their own.  Diet, stress management and environmental exposure consciousness needs to be a part of the equation as well.  So, if you are the type of person who hits the gym every day, bikes to work 35 miles each way uphill, swims 750 laps before most of our alarm clocks are buzzing or runs more miles in a week than many of us drive…BUT, eats, quite frankly, like crap (and you know who you are…) just thinking you’re going to “burn it off,” than this particular article is for you.

It in, researchers looked at the communication between skeletal muscle and the beta cells of the pancreas (the cells that produce insulin) in samples of human skeletal muscles that had been subjected to exercise or were left at rest.  These samples were then mixed with beta cells to see if inflammation played a role in protecting or damaging these insulin-producing cells.  Here’s what they found:

Maybe this seems a little complex, but the take home message is that, in the presence of inflammation, the normally protective compounds released by the muscles during exercise actually damage the beta cells of the pancreas–a situation that absolutely will set you up for diabetes given enough time.

This means that exercising in the context of an otherwise unhealthy lifestyle may not allow you to just “burn off the calories.”  Rather, this lifestyle may actually prove toxic to the incredibly important beta cells of the pancreas that are constantly fighting to keep blood sugar under control and stave off diabetes.

Think about that the next time your half marathon takes you to that fast food restaurant.

Categories: Diabetes (Type 2), Insulin, Obesity and Weight Loss, Prediabetes
Disclosure of Material Connection: Some of the links in the post above are “affiliate links.” This means if you click on the link and purchase the item, I will receive an affiliate commission. Regardless, I only recommend products or services I use personally and believe will add value to my readers. I am disclosing this in accordance with the Federal Trade Commission’s 16 CFR, Part 255: “Guides Concerning the Use of Endorsements and Testimonials in Advertising.”