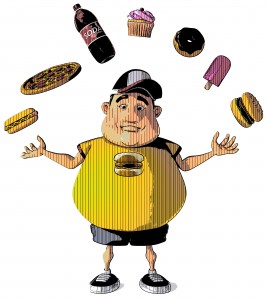 Society has been brainwashed into thinking that drugs to lower cholesterol are required to prevent heart disease if you have high cholesterol. Money thrown at a consistent marketing message can do that.

It is not uncommon for me to hear a patient speak defiantly in a phrase like, “I do NOT want to go on those cholesterol drugs.” It is stated in the same tone as someone saying he or she does not want to have a leg amputated due to a severed artery bleeding like an Uma Thurman opponent or gangrene you can smell from down the hall. This is how serious much of the American public thinks the issue of taking or not taking a statin is. They are under the mistaken belief that statin drugs will actually do a lot to protect him or her from a heart attack.

I think these patients fear that the doctor will recommend (key word here is “recommend,” not “force”) statins when the misguided lifestyle advice doesn’t work. If the lifestyle changes didn’t work, then taking a drug to lower cholesterol is now a requirement, not an option. If only the general public really knew (If that statement does not mean anything to you, it might be a good time to spend some time with my Cholesterol eBook that can be found on Amazon by clicking here).

But this article is not about beating up on how ineffective the statins are at actually preventing a heart attack or the long list of side effects associated with their use. Rather, this article is about a much, much bigger issue.

It is about the public’s view of medicine and the subsequent responsibility we have for our own health. Just yesterday I had a conversation with a patient whose wife is an obese diabetic with a desire for sweets that she just won’t kick. Her, and many other diabetics just like her, are under the delusion that everything is ok because they are on drugs to “control” the condition.

But what would’ve happened if we didn’t have drugs that we give to diabetics? We would have to sit this patient down, have a direct face-to-face conversation about what is going to happen to her if she doesn’t make changes. Not MIGHT, but WILL happen. Replay this scenario with pretty much every other chronic disease, especially in the early stages of the disease. In this scenario, the responsibility is smack dab in the patient’s lap where it should be.

Medications, however, remove the responsibility from the patient. There is no worse ideology than one that eliminates a lack of personal responsibility when it comes to the prevention and management of chronic disease. None.

This particular study says it all and makes it more real that patients who are given drugs to “control” their chronic disease or, even worse, drugs to control merely the RISK FACTOR for a chronic disease, (like cholesterol) have let go of personal responsibility.

In it, researchers compared two groups of 27,886 US adults, from 1999 through 2010; one group who took statins and the other group that did not use statins to lower cholesterol. Here’s what they found:

In a group who had an obvious concern over cardiac health, enough so to take a medication designed to lower cholesterol to lower the risk of a heart attack, the concern extended no further than a number on a lab test. If that number got better using a drug to lower cholesterol, there was no need to control anything else in the lifestyle.

Unless we return the true responsibility for health back where it belongs (with the patient) the health of our culture will continue to decline, with the doctors frustrated and their time bled dry and the drug companies raking in massive profits.

Categories: Cholesterol, Heart Disease
Disclosure of Material Connection: Some of the links in the post above are “affiliate links.” This means if you click on the link and purchase the item, I will receive an affiliate commission. Regardless, I only recommend products or services I use personally and believe will add value to my readers. I am disclosing this in accordance with the Federal Trade Commission’s 16 CFR, Part 255: “Guides Concerning the Use of Endorsements and Testimonials in Advertising.”