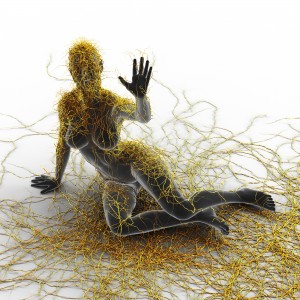 Ok. I’ll admit it.  I am completely stumped as to why drugs to lower cholesterol are among the most successful drugs that drug companies manufacture.

The evidence for their effectiveness pretty much sucks.  Out of 100 people who are prescribed statins over the course of 5 years, only a single person will actually benefit.  Not quite as rare as winning the lottery, but very few people have side effects from buying a lottery ticket.

Not so with statins.  The list of side effects in far longer than you probably realize.  At the top of the known list is muscle problems.  From microscopic damage all the way up to fatal reactions from muscles literally melting (fatal rhabdomyolysis).  It would not be unreasonable to say that almost everyone who takes a statin drug to lower cholesterol will suffer some type of muscle damage, even if it’s only on the microscopic level.

But what about your nervous system?  Could your brain and the nerves going into your feet and hands be affected just as much as the muscles?  And if so, why didn’t your doctor mention this side effect potential?

Here’s a little tidbit.  When it comes to clinical studies on statins, the odds are stacked against you and your doctor for finding out just how common many of the side effects are.  In both the muscle and nervous system lists of side effects, there are some 10-11 separate categories.  So, when the reports of a study done on drugs that lower cholesterol are released, the risks are deemed “uncommon.”  However, if you grouped all of the “nervous system” or “muscle” side effects into a single category, the rates of these side effects for EACH CATEGORY approached that 10% or higher level.

Considering that only 1 in 100 will benefit from the drug, 1 in 10 having significant side effects is a BIG deal.

As for just how common nerve damage may be, I’d like to point out this particular study.  Normally, I review current research that has been published in the past month or so, but this one of those “oldie but a goody” studies from 2002.  It is even more important in the context of recent recommendations to give practically every living being over 5 years of age who knew someone who had chest pains or lived in the same zip code as someone with heart disease a statin.

These researchers looked at cases of nerve damage (polyneuropathy) to see how likely statin use was related to the nerve damage.  Because of the way that the data was retrieved, the diagnosis of polyneuropathy was limited to definitive, probable or possible.  (Definitive = tested for all previously listed exclusion diagnoses and conditions, and where no apparent cause for the neuropathy had been established.  Probable = only sufficient information existed to rule out alcohol over-use, diabetes, and renal insufficiency.  Possible = information available was not sufficient to ascertain the presence or absence of any of the above-mentioned exclusion criteria.)

Here’s the specifics of this study:

These aren’t exactly small relationships. If the drug manufacturers get their way and there is a massive increase in prescriptions for statin drugs, the number of cases of permanent nerve damage caused by statins are going to go through the roof.

And for what?  So a single patient out of a hundred suffer one less heart attack?

Category: Cholesterol
Disclosure of Material Connection: Some of the links in the post above are “affiliate links.” This means if you click on the link and purchase the item, I will receive an affiliate commission. Regardless, I only recommend products or services I use personally and believe will add value to my readers. I am disclosing this in accordance with the Federal Trade Commission’s 16 CFR, Part 255: “Guides Concerning the Use of Endorsements and Testimonials in Advertising.”