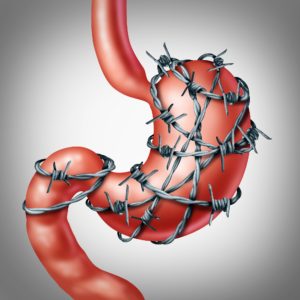 If you’ve got a bleeding ulcer, drugs that block acid like Nexium, Prilosec and Aciphex can save your life.  Even if that ulcer is caused by your daily anti-inflammatory.

However, for the remaining 99% of the time that acid-blocking drugs are used, they can wreak havoc.

You see, the body digests….and it does everything else.  When it comes to digestion, stomach acid is the lynchpin.  The key.  The big daddy.

Stop the production of stomach acid, and you open up the Mother of all Pandora’s boxes.  Stomach acid does not just participate in digestion, it STARTS it.  Among many other things.  Here is just a small sample of what stomach acid does in the human body:

There’s one other little ditty that stomach acid does.  There are very few microorganisms that can survive a pH of 2 or 3.  In other words, stomach acid sterilizes most things that try to make it through the stomach.

That means that if you do not have enough stomach acid because you are, say…taking Nexium…, bacteria will begin to grow in regions of the intestine that are not supposed to have bacteria growing in them.  The technical term for this is small intestine bacterial overgrowth (or SIBO, for short).

And if you want to pick something that can totally screw up your health, SIBO is a good first choice.  Having bacteria growing where it is not supposed to be begins to damage the lining of the small intestine, allowing things to get into your body that are not supposed to.  This can create massive amounts of inflammation everywhere, even in the brain.

Just in case you think I’m making this up, researchers in this particular study looked at the gut flora of the lower intestinal tract (microbiome) of 1827 healthy twins to see if proton pump inhibitor (PPI) use had any negative effects.

Here’s what they found in those PPI users:

The list I gave earlier is really bad enough when it comes to destroying your health.  But when you add in a disruption to the microbiome, the sky’s the limit to how much damage long-term use is to your health.

And just what is “long-term?”  If you read the safety labels, then anything over 3 months is completely out of context of what these drugs are designed for.  That does not mean that I haven’t seen patients on these for DECADES.  THAT is a disaster waiting to happen.

But what about all those patients out there that make too much stomach acid and need these drugs?

I will go out on a limb and state that almost NO ONE who has reflux or gastritis makes too much stomach acid.  Quite frankly, short of a gastrin-producing tumor, it just doesn’t happen.  As a matter of fact, with stress and with aging, stomach acid production goes down.  It gets to the point where some 40% of women over 50 are not producing any stomach acid AT ALL (achlorhydria).

I’m not saying that stomach acid getting where it’s not supposed to be is a good thing, because it’s not.  What I am saying is that stomach acid is not the problem.  Usually, the problem is just the opposite.  I can’t tell you how many times I’ve given digestive support to patients with gastritis or reflux and their symptoms went away.

Kind of ironic that this approach to totally opposed to the mainstream medical approach and yet seems to work very well.

All without destroying your microbiome and your long term health.  What a bargain.

Categories: Digestive Complaints, Probiotic
Disclosure of Material Connection: Some of the links in the post above are “affiliate links.” This means if you click on the link and purchase the item, I will receive an affiliate commission. Regardless, I only recommend products or services I use personally and believe will add value to my readers. I am disclosing this in accordance with the Federal Trade Commission’s 16 CFR, Part 255: “Guides Concerning the Use of Endorsements and Testimonials in Advertising.”