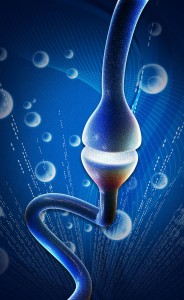 I don’t need to go into how epilepsy is a condition not limited to the brain, because I have covered this many times in the past.

This is also just one of the areas where migraines and seizures have similarities—migraines are also a brain condition that is not limited to the brain.  Both are an indication that something is very, very wrong.

All of the evidence points to an underlying problem with the way the brain cells are able to produce and use energy.  This problem is referred to as mitochondrial dysfunction (which just so happens to be one of my favorite phrases and, coincidentally, the root of all that is evil in chronic disease…).

In seizures, this problem generating energy leads to the brain cells firing before they are supposed to fire, resulting in a domino effect on other brain cells, producing the uncontrolled brain firing of a seizure.

Regardless, researchers seem to agree that there is a serious problem with the blood vessels in both migraines and seizures.  Ultimately, blood vessel problems play a role in dementia and Alzheimer’s disease as well.

To clarify what I mean by “blood vessel problems,” you need to understand that your blood vessels are very dynamic.  They expand and contract as needed based on signals they get from the cells they feed to provide nutrients.  As an example, if you took a racquetball and started squeezing it repeatedly, the muscles cells in your hand and wrist will quickly need more nutrients to continue.  As a result a signal is sent to the blood vessels of the arms, causing them to dilate (open) and increase blood flow into the forearm and hand.

Picture this same action in the brain.  When the brain cells in an area need more oxygen, glucose or micronutrients, blood flow to this area of the brain increases.  No imagine if the blood vessels were no longer as responsive.  You end up with starving brain cells.  Not a good scenario.

With this as background, I’d like to throw this particular article into the mix.  In it, researchers reviewed the dangerous relationship between blood vessel function and damage and cognitive decline.  They open with identifying findings that are common between chronic epilepsy, Alzheimer’s dementia and age-related cognitive decline.  These include:

If you’re still reading this far, then you now understand just how critically important it is to go beyond seizure control to making whatever lifestyle changes you need to make.  A true anti-seizure treatment protocol needs to include a lifestyle that is anti-diabetic and anti-heart disease.  Luckily, these lifestyles are pretty much the same.

And you may find that, once you have adopted a healthier lifestyle, your seizures will also improve.  You’ve got nothing to lose.

Except your brain cells.