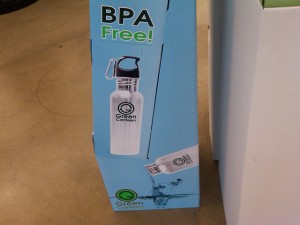 We live in a toxic soup.  In an attempt to avoid at least SOME of the pollutants, many have become dilligent about avoiding Bisphenol A (BPA) in plastics.

I first wrote about BPA in canned goods as early as 2001 and have been a vocal advocate for avoiding its use as much as possible.  It took some time and pressure from consumers, but the plastics community responded by coming out with everything in a BPA-free version.  It’s now widely accepted (by everyone EXCEPT the EPA) that BPA is bad for our health and you will see no labels on the front of baby bottles proudly proclaiming that they still load their plastics with BPA.

Birth defects, diabetes, obesity and some cancers have been linked to BPA exposure.  The scary part is that almost all of us have detectable levels in our bloodstream.  Exposures are everywhere and can include:

So you educate yourself on your exposure sources of BPA and decide to only go for the BPA-free water bottles and baby bottles.  This is a good thing, right?

I have always been wary of plastics in general and specifically plastics well-known to contain BPA.  For my family, we only use stainless steel pitchers for our tea (you can find the ones we use on Amazon by clicking here).  We try to cook in glass Pyrex dishes whenever possible.  We rarely drink bottled water (ours is a very heavy tea drinking household).  While I don’t have a problem with sparkling waters (like La Croix or Perrier), these aluminum cans are lined with BPA so we avoid them.  In its place we have just ordered the Soda Stream Crystal, which uses glass bottles (again–this can be found on Amazon by clicking here).  I’ll have more feedback on how it works in a few weeks.

In general, I have an inherent distrust in plastics, BPA-free or not.  Turns out that my paranoia may actually be somewhat rationale, despite what the EPA states…

This particular study looked at the hormonal action of other chemicals present in BPA-free water bottles that have been used to replace the bisphenol A.  Here’s the details:

Overall some pretty scary results that should have you concerned.  Maybe my paranoia is not really paranoia, but a distrust based on knowledge about environmental exposures.  And I’d much rather prefer to consider myself ahead of the curve than wacky.

Thanks to Heidi’s Dish for publishing this guest article on the Natural News website–it’s one I might have missed otherwise!

Category: Environmental
Disclosure of Material Connection: Some of the links in the post above are “affiliate links.” This means if you click on the link and purchase the item, I will receive an affiliate commission. Regardless, I only recommend products or services I use personally and believe will add value to my readers. I am disclosing this in accordance with the Federal Trade Commission’s 16 CFR, Part 255: “Guides Concerning the Use of Endorsements and Testimonials in Advertising.”