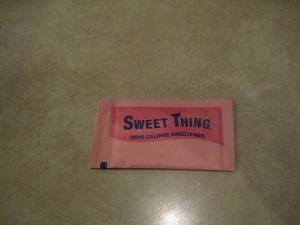 Who’s buried in Grant’s tomb?  Why did the chicken cross the road?  Why are we still using artificial sweeteners?

All timeless questions that never seem to have the right answer.  Artificial sweeteners were initially used with the premise of cutting calorie intake and fighting off weight gain and diabetes.

They were never designed to actually improve the taste of food, candies and snacks.  Think about it–did you actually LIKE the taste of artificial sweeteners right off the bat?  Most that I’ve talked to say it’s a taste you have to get used to.  Why would you continue to take in a chemical that you have to “get used to” unless you believed there was some positive benefit to your health?

The belief that the use of artificial sweeteners was good for your health was continually promoted by doctors, massive marketing campaigns by the chemical companies that produce them and national organizations like the American Diabetic Association.  The brainwashing went on for decades and still continues.

It was so powerful that, despite mounting evidence that these chemicals PROMOTE the very things they were supposed to protect (diabetes and obesity), artificial sweeteners are still found everywhere you turn.

And the manufacturers have been getting very sneaky at putting them in products.  Terms like “low sugar,” “low carb” or “zero calories” can be your first clue.  But sometimes the approach is way more devious.  You may see on the front of the container for some drink that it is advertised as “no artificial flavors” and think that it’s ok.  But buried in the ingredient label, however, is that sneaky little sucralose chemical.  All of the wording on these products is very, very carefully chosen to deceive you.

This is not the first study to link changes in gut bacteria to artificial sweetener use.  Combine this with mounting evidence that gut bacteria may play a critical role in the development of obesity and diabetes and you’ve got a time bomb ticking.  Our kids are being fed artificial sweeteners like candy (pun intended) and parents, in general, are oblivious to the dangers posed by their use.

With all of this said, I will end this article with the same question I began it with…”Why are we still using artificial sweeteners???”

Categories: Diabetes (Type 2), Obesity and Weight Loss, Prediabetes, Probiotic
Disclosure of Material Connection: Some of the links in the post above are “affiliate links.” This means if you click on the link and purchase the item, I will receive an affiliate commission. Regardless, I only recommend products or services I use personally and believe will add value to my readers. I am disclosing this in accordance with the Federal Trade Commission’s 16 CFR, Part 255: “Guides Concerning the Use of Endorsements and Testimonials in Advertising.”